On the fourth episode of Herbert Inside, David Henne sits down with Taylor Clarke, the editor-in-chief of the Hofstra Chronicle.

On the third episode of Herbert Inside, David Henne sits down with Joseph Valerio, the Chief Video Engineer of the Lawrence Herbert School of Communication.

On the second episode of Herbert Inside, David Henne sits down with Lance Ulanoff ’86.

Dina Santorelli graduated Hofstra in 1990 and received her Master’s at Hofstra in 2009. A few years after that she published the first iteration of what became the Baby Grand trilogy. Former Required Radio President Adam Castar sat down with Dina at Digital Waterworx in Plainview, to discuss her novel series, her writing background and anything she’s planning for the future. Music Credits: Music from https://filmmusic.io “Werq” by Kevin MacLeod (https://incompetech.com) License: CC BY (http://creativecommons.org/licenses/by/4.0/)

Hofstra Audio Magazine, or H.A.M. , is your destination to find out the goings-on around Hofstra University. In this first episode Required Radio’s own Julia Berk sits down with Last Great Kings frontman and Hofstra student Tommy O’Connor to talk about his band, Pat Viala, a 5-time Grammy Award winning producer, speaks to H.A.M. about teaching music production classes at Hofstra, and Gina Santillo discusses the realities of relying on music licensing for radio shows. For more, keep it locked into Required Radio at requiredradio.com and listen to us on Apple Podcasts, Google Podcasts, Stitcher and Spotify.

On the latest installment of Hofstra Club Profiles, Adam Castar sits down with Kat Anderson, President of Hofstra’s spoken word poetry club, Hofstra Sp!t. Kat discusses how the club was founded, her experience joining as a freshman, and helping new members get acclimated to performing spoken word poetry. For more, keep it locked into Required Radio at requiredradio.com. Rate, Review and Subscribe on Apple Podcasts and Spotify!

On the latest episode of Hofstra Club Profiles, Adam Castar sits down with Hannah Thueson, secretary for Hofstra’s chapter of PRSSA. Hannah goes into detail about how the club was founded in the 90s, what they presently do and upcoming events. For more, keep it locked into Required Radio at requiredradio.com. Don’t forget to rate, review and subscribe to Required Radio on Apple Podcasts and Spotify.

On the second edition of Hofstra Club Profiles, Adam Castar sits down with HerCampus Hofstra co-presidents Sarah Hanlon and Abby Strusowski to talk about their club and its impact on campus. HerCampus is an online magazine written by and for college women. For more, keep it locked into Required Radio at requiredradio.com.

You can check out all of HerCampus’s articles here: https://www.hercampus.com/school/hofstra

On this episode of Required Radio’s newest segment, host Adam Castar sits down with Alex Rufer and Adam Coren, the President and Vice President respectively of Hofstra Esports. They discuss how their club came to be, current events that they’re hosting and future plans for the organization. For more, keep it locked into Required Radio, and stay tuned for future episodes of Required Radio Club Profiles right here at requiredradio.com.

Hofstra’s Music Fest was an exciting time for everyone that showed up there. Hofstra Concerts put together a great show and tactfully organized 5 separate acts.The performers were Aaron West, The Last Great Kings, CRUISR, Kirk Knight, and the headliner was PVRIS. The most notable performance for Hofstra students was Battle for Music Fest Winners “The Last Great Kings”. “The Last Great Kings”, like most college bands, were very humble and were excited to perform at their biggest venue yet in their young careers.

Their lead guitarist, Tommy O’Connor, was able to give Required Radio a minute to talk about the scale of this performance, “This is miles different from anything we’ve ever done… we’re not used to having other people help us set up; when we brought our equipment and people were like, ‘no we’ll take that for you’, it was a big thing and we were like, ‘no we can do it’, and they said, ‘no let us help you…it’s the professionalism, it’s just like…I feel like a real band”. 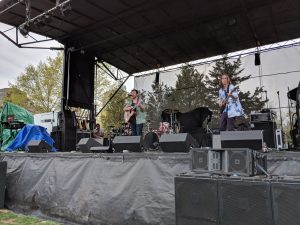 After The Last Great Kings’ performance, CRUISR came up to rock the stage. The gave a shout out to headliner PVRIS, with their lead guitarist and vocalist Andy States saying how the two bands are really good friends. Guitarist Bruno Catrambone elaborated on their relationship, telling Required Radio, “Yeah…they’re really cool, we toured with them and became friends as a result”. Some of the most exciting moments of CRUISR’s show was that they played some unreleased songs, which were a special treat for the Hofstra faithful. 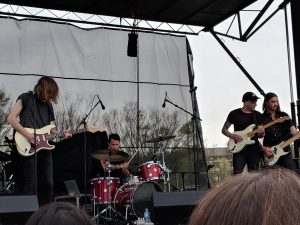 CRUISR’s unreleased tracks hyped up the audience, but the two leads jamming back to back peaked the excitement of the crowd. 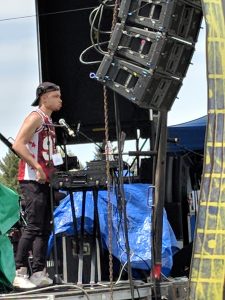 The headliner of the show was PVRIS, who expectedly drew the largest crowd. One of the best moments of their whole act was when lead singer Lynn Gunn started drumming with drummer Brad Griffin; 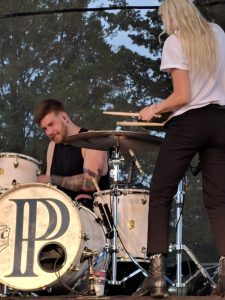 PVRIS was a fantastic act, and the student were really getting into the music and were incredibly engaged in the performance. PVRIS even came back on for an encore after their last song. Gunn also gave out some of her guitar picks, and Griffin threw his drumsticks into the crowd.

All in all, Hofstra’s Spring Music Fest was the most exciting moment of this semester. It lived up to the billing of being a very hype concert and the feeling was that everyone who went went home satisfied.